Include $YGG in NFTP

I think we should consider the addition of Yield Guild Games to NFTP.

Yield Guild is a DAO for investing in NFTs used in virtual worlds and blockchain-based games built on Ethereum. Its goal is to create the biggest virtual world economy through maximising its community-owned assets and allowing profit sharing with token holders. It does this through investing in play-to-earn games and in-game digital assets. $YGG combines the best of the NFT and the DeFi, bringing yield farming to game economies while adding value to these virtual worlds by developing the content and economy of these games.

Since inception, via SUSHI MISO on the 27th of July the token has had an impressive performance Precio, capitalización de mercado, gráfico e información sobre Yield Guild Games (YGG) | CoinGecko

YGG is an index itself, as it manages a variety of game-related NFTs, digital assets and virtual land parcels, which members use to create greater earnings. Treasury and guild will focus on play-to-earn games that have shown strong potential and community support, such as Axie Infinity, The Sandbox and League of Kingdom. The guild is also invested in other games such as Illuvuim and Splinterlands.

It would be like “double-dipping” with AXS as YGG is heavily invested in AXS, but thats just the start of their strategy.

YGG is an ERC-20 token and has several functions: 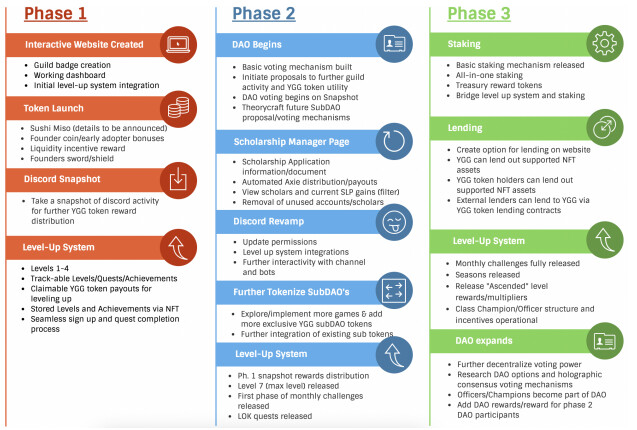 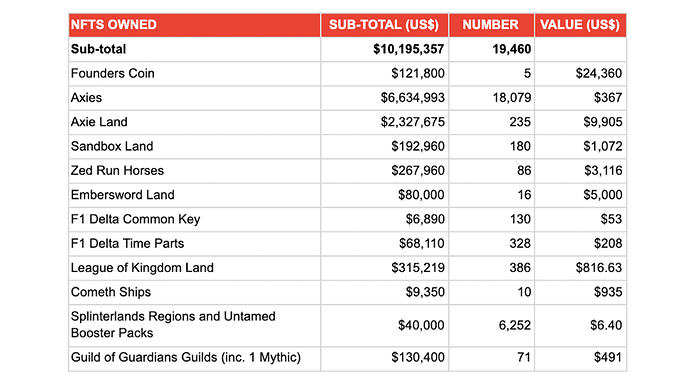 Games they are invested in

This is really well researched, I definitely like the idea of making NFTP a more dynamic index where promising projects can be included while they’re still new.

For some info, if YGG was included in NFTP it would be weighted somewhere between MANA and SAND, so about 14-15% of the index. Since NFTP is a 10 token index it would push NFTX under the inclusion threshold and put it on the bench. I think this is fine since NFTP doesnt currently have any tokens waiting on the sidelines.

What’s nice about YGG is that we would indirectly get exposure to SLP making NFTP an 11 token index.
Although you could argue that AXS gives exposure to SLP, but I digress.

It also sounds like this would make NFTP an index that actually holds NFT’s, albeit only through YGG. I think this is a step in the right direction for NFTP.

Only Issue I can see is that most of YGG’s liquidity is on SushiSwap, however, there is a fairly decent Uniswap V3 pool that could maybe be used as well.

I don’t have a vote in this decision anymore, but theoretically I approve: NFTP needs to start seeing some new blood injected in terms of additional candidate assets, and let the scoring strategy have the chips land where they may.

There is one issue here, and it is the same one that prevents ILV from being included: the requirement of a Uniswap V2 market with ‘sufficient’ liquidity: this is not the case at present, as YGG is primarily available via Sushi and V3. I don’t know the ease with which we could extend the current setup to include V3 markets as well, and would have to defer to @d1ll0n on this (which leads into a wider conversation about the need for a potential metaoracle that allows us to price/score assets across multiple DEXes at once).

I think it’s a cool idea but i would be worried to list tokens with such a small circulating supply and such a high fully diluted market cap value.

Ok makes sense. Is there any listing rule around circulating supply/total supply ?

Would also like to see illuvium in the Index.

I’ll point out here that the first part of our scheduled Balancer V2 upgrade is a metaoracle that will allow us to start pricing (and therefore including) assets from a much wider range of sources: Uniswap V2/V3, Sushi, Balancer, Coinbase API and Chainlink feeds.

We’ll be in a position to include things like YGG and ILV once that’s done.