The initial phase of NDX distribution served two primary purposes: diluting the governance power of the founders and establishing sufficient liquidity to demonstrate the efficacy of the indexing methodology.

The former was inherently a consequence of distributing the governance token, and the latter was inarguably a major success. Indexed has consistently hosted several of the top index tokens by growth, and our TVL has grown from a few hundred thousand dollars in late December to around $30m at time of writing.

Now that this phase has ended, we will need to scale back rewards distribution substantially and change what we are looking to accomplish with it.

LP rewards should be utilized for two things going forward:

Relatively high emissions are useful for bootstrapping liquidity in new assets, particularly when they are of substantively different in form from other product offerings. Early liquidity allows us to demonstrate the efficacy of a management strategy or lack thereof, while having no or little liquidity can lead to very high impermanent loss for whoever is providing liquidity, and results in a lack of any meaningful data about performance.

Minting and burning index tokens should primarily be done in large amounts by market makers and arbitrageurs, as doing so is too expensive for smaller purchases and much more complex to integrate with other protocols or interfaces than a simple market buy/sell. LPs who provide liquidity for our tokens on external markets make them as accessible across the Ethereum ecosystem as any other ERC20. By incentivizing these liquidity providers with NDX rewards, and doing so in a targeted and dynamic fashion, we can target liquidity at different pools according to their level of slippage for orders of various sizes.

When liquidity is deep enough across markets for all of our indices that providing additional LP rewards for them stops being worthwhile, we can shift the remainder to single-sided staking in order to both incentivize additional AUM and ensure that the pools themselves are sufficiently liquid that they are rebalanced using their internal AMMs.

The new distribution contract is based on the MasterChef contract from Sushiswap. It allows us to define a number of “allocation points” for any staking token we wish to distribute rewards for, which entitles stakers of that token to a pro-rata share of NDX distributed per block.

Governance may assign a “points allocator” role to grant permission to add and modify reward allocations for each staking token and set a “rewarder” contract which is notified whenever a staker receives staking rewards for that token. This can be used in the future if we wish to create more complex staking distribution logic, or if we partner with another protocol for dual token rewards.

We would like to explain the choices we have made for the distribution - specifically the non-constant slope and the total amount chosen for emissions.

We anticipate a persistent increase in the TVL of the Indexed protocol as time goes on, as a natural consequence of both new products being put forward and increased attention from within both DeFi and retail environments. As a result, we expect a natural (although not necessarily linear) increase in the per-unit cost of NDX over time due to its relationship to the protocol TVL as metamoney: the assumption being that it should always be more expensive to acquire enough liquid NDX to force through a malicious governance attack than what is at stake within the protocol itself.

If we take the above as given, along with the fact that what we are targeting for with this proposal is a fixed slippage when utilizing the incentivized liquidity against ETH (reminder: 1% slippage for a 10 ETH purchase), it makes no sense to deploy a constant rewards-per-block over the entire two year period: the result would be a steady driving up of APY against all pools, leading to the protocol eventually vastly overpaying for liquidity for no good reason. This is not a good use of treasury funds.

To this end, we have considered various decay parameters against the average block reward throughout the lifetime of the emissions program. There are two main factors here: a desire to not make the decay too severe (leading to a dropping off in LP over time if the protocol TVL increase isn’t equally as aggressive), and balancing the total amount of NDX to be distributed for this purpose against said decay - allocating too much or too little would result in either another artificial pump in TVL due to mercenary farming or the aforementioned bleeding-out of liquidity.

At the risk of getting too boring with the details, we believe we’ve found a suitable compromise between the two. The parameters are:

Note that the figure 4778182 represents two years, assuming a 13.2 second block time (which has been a fairly stable number over the last year).

Visually, the block reward and total-NDX-emitted over time can be seen below: 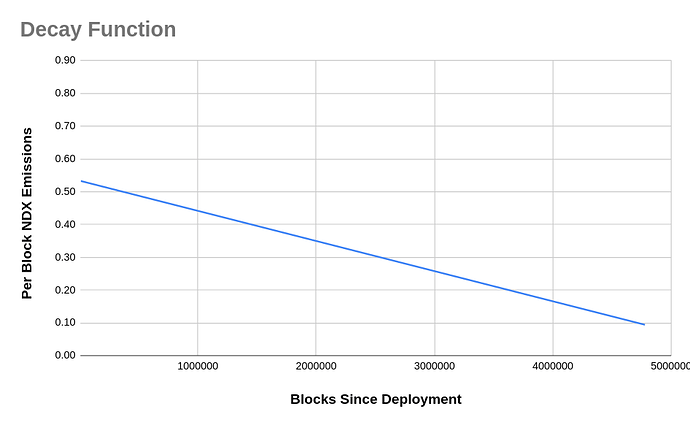 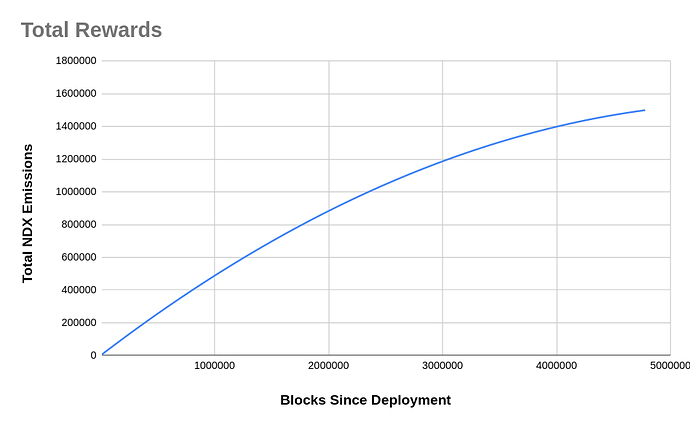 During the stopgap emissions phase, the protocol was rewarding ~3,333 NDX daily across the core indices - DEFI5, CC10 and ORCL5 - and observed that liquidity for the first two was within the desired range. Our other large ETF at present - DEGEN - is currently emitting 500 NDX a day, and is also within range.

As such, we believe that starting the schedule with the above rate of ~3,490 NDX per day across all core pools is minimally disruptive to the ‘expected’ returns that current LPs will observe.

The remaining questions are: why two years, and why 1.5 million NDX?

To the first, we believe that passing up a schedule that targets the medium-term is in itself a vote of confidence from the DAO in the protocol itself - we’re not going anywhere, and as such neither should the rewards schedule. However, setting the schedule for too long produces a daily amount that’s likely insufficient to secure liquidity, whereas too short simply leaves us in a position of having to deal with this question again fairly soon.

To the second, we are aware of the need to retain a significant chunk of liquid NDX in the treasury. It doesn’t make much sense for us to simply throw all of it into LP rewards (see the above point about overpaying), especially in light of developments such as the loan to Wintermute Trading for market making, and the potential for striking VC/funding deals in the future - the treasury needs something in its pockets to bargain with. At the conclusion of this program, including the initial geyser, 40% of the total supply of NDX will have been handed out via liquidity mining. In our eyes, that is enough.

We’ve put the above forward on Snapshot for a straight up or down vote against the above parameters.

If you have questions or comments, here’s the place to voice them!

Awesome write up, really looking forward to seeing these stats.

Perfectly balanced, as all things should be…

Every stakeholder interest has been reasonably considered…

I also expect the DAO/Sigma to come out with other means to onboard VC/funding deals, apart from token issuance each time…

I would ask, as a way of gathering some feedback, that if you’re inclined to vote no (or if you have already), that you quickly pop in here and mention what part of the proposal that you object to - just seeing “no I don’t like it” without any directional feedback doesn’t help us too much!